we wake up early and walk w/ suitcases downtown to meet michael and jen, who are giving us a ride to catch the ferry in isabel segunda. we're down to six bucks cash so we head away from belly buttons, where they're eating, and pop in to somewhere that looks like they take cards. sadly it also looks like a denny's by the seaside and sadly i pour myself a coffee before we decide to get out of there so suddenly we're down to four dollars. michael and jen had left the windows to their rental car down by accident the night prior and it is like sitting in a mosquito nesting ground, seemingly hundreds swarming and biting. we make it, we take the ferry, we part ways w/ michael and jen in fajardo. we retrieve our car from the shady lot in tact and get back on the road toward san juan, planning a turn off to see el yunque rain-forest. 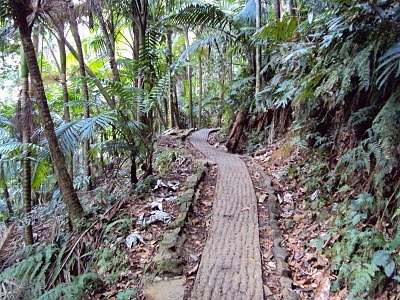 later we're in san juan, navigating highway drivers, unhelpful maps, unhelpful gas station directions, frayed. we finally find the old san juan sheraton (which m's mother has graciously gifted us via her airline miles) and check in. our room is exactly over an enormous exhaust blower system, kind of like a low-grade airplane engine rumbling non-stop. we switch rooms. it's around 4 and we're starving but we decide to go out for a beer and explore san juan and by virtue of exploration we'll find the right place to eat dinner. we'll come back to the room and shower and then eat dinner at our pre-selected place. it's the perfect plan. 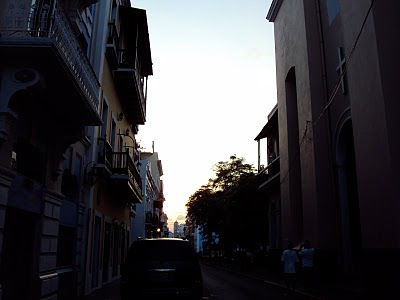 we plan to have a beer at st germain, which our book recommends, but it's closed, not opening for a couple hours for dinner. we could come back for dinner or we could eat breakfast there in the morning. we find fortaleza st, which is a-brim w/ possibilities. we narrow it to two 1) marmalade (which appears upscale and well-regarded and was recommended to us by our host in vieques) and parrot club (which appears downscale comparatively but which sometimes has live music). margaret goes into parrot club and asks, turns out they have live jazz starting at 8pm. hmm. we sit w/ all that over beer on plaza. we return to room. we swim. we shower. we dress. we leave.

back on fortaleza street and we find ourselves in a strange mini-paralysis, unable to make a decision about which restaurant to eat at. marmalade looks nice but completely empty. parrot club is hopping. we walk between them several times unable to make a decision, perhaps owing to a long day of travel and the end of our trip, fried brains. finally we go to marmalade, decide to have cocktails and let their quality determine whether we'll stay there for dinner. perfect plan. in marmalade we suddenly realize that their dining room is hopping - we were only seeing the front of the establishment, a sort of ante-room w/ kubrick-ian lighting and couches where no one happened to be. we sit in the ante-room and order 10 dollar cocktails. they're weak and fruity and suddenly we feel we've made an epic mistake and we should not eat here. we down our cocktails and decide to eat at parrot club. 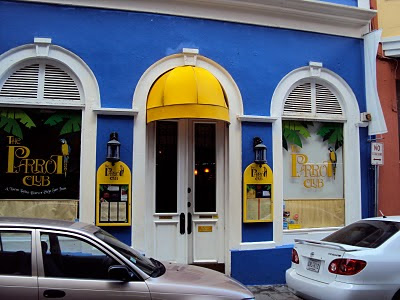 at the hostess station at parrot club. the hostess asks our name. margaret says 'margaret'. the hostess writes down 'barker'. i say, 'it's actually margaret, not barker'. the hostess cackles and lets on that she's been drinking and quickly changes the name. 'it'll be about ten minutes' she says. so we sit at the bar. 20 minutes later i survey the room, there are about five open tables. i go back to the hostess. she looks at me like she's never seen me before in her life. i say "can we sit now?" she says "do you have a reservation?". i remind her of the margaret/barker hilarity and she seats us next to an enormous potted plant, the leaves hanging exactly over our heads. after ten minutes or so a waitress appears. she recites a couple specials, making little effort to disguise her dis-interest in us. i ask her to recommend between two choices and she says "oh, definitely that one". no further clarification. we order and suddenly feel we've made an epic mistake and we should not eat here. but it's too late. the food arrives and confirms our fears.  also, there is no live jazz. there is no music playing at all. it is the absolute nadir of an otherwise amazing trip.

later we're at the nuyorican cafe with an hour to kill before the music starts.
posted Brian Padian at 11:11 AM