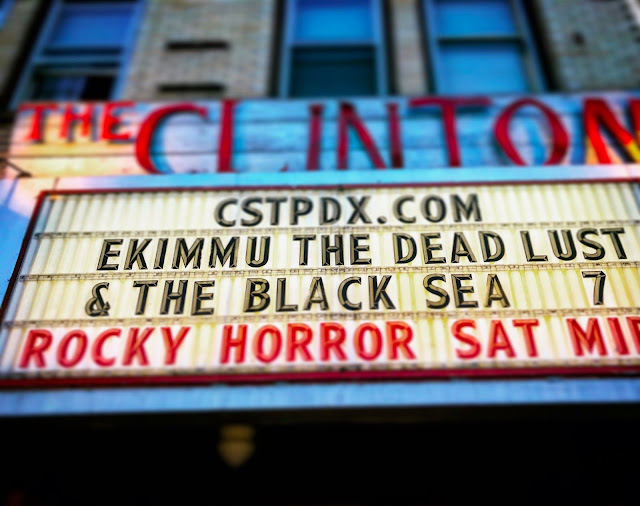 I arrived at Clinton Street Theater (via car2go) at 6:30 or so. Had some of the familiar pre-flight nervousness associated with all screenings and was really eager for the lights to go down and for the films to begin. THE BLACK SEA was playing as the 2nd of a double feature with Ekimmu/The Dead Lust. This had great personal significance for me because Ekimmu's filmmaker is Andy Koontz, a fellow brain tumor survivor. Andy and I connected on line some time back and communicated frequently via social media but we had never met in real life. There is an ease and shorthand to survivor communication (particular to trauma in general I presume, not just medical/brain trauma) - where since so much is understood without being voiced. Andy understands things that no one else really can by virtue of his journey and his battle (sidebar: Andy had medullablastoma, I had chondrosarcoma). A few minutes before 7 Andy and his wife Chrissy arrived. We took a couple pix out front and then headed into the theater.

The lights dimmed and Ekimmu/The Dead Lust began. Now, I'd seen it a couple times at home but as with all cinema: see it in the theater, the best and truest way to experience it. Ekimmu in particular benefits from the biggest possible screen and the most dynamic sound system. The film - in part about a young couple who find a bloody woman on the side of a rural road at night - has a raw energy to it and is most impressive considering it was made on the slimmest of shoestring budgets. Andy not only wrote, acted, shot, directed and edited, he also did the sound design and composed and performed the original score. A true labor of love. I can't wait to see how it does on the film festival circuit (I suspect quite well) and even more what Andy does next. Seek his movie out and lend him your support. (sidebar: both movies looked and sounded great at Clinton Theater)

When Ekimmu ended, I wasn't certain if Andy was going to do a Q & A before for my movie or not, we hadn't really discussed it - but it didn't matter b/c the lights stayed down and THE BLACK SEA began. I hadn't seen the film or actively contemplated it all in over a year (last shown in Feb 2016 at the SoCal Film fest) which was truly a liberating experience. Letting go. I watched solely (okay mostly) as random viewer and allowed things to just happen before me, void of judgement. Letting go. Things I'd previously disliked seemed to work. The movie has a dark flow and dream logic to it that I've always felt like I have to defend or rather that I have to be on guard about but this time to put it in crude terms I didn't give a shit. The cast is awesome, score, camera, sound design all top notch. I am very proud of it and eager for it to be seen. (there is rumor of upcoming NW Film Center screening this summer, will confirm - and some possible upcoming West Coast dates/venues that I can't discuss just yet but TBA).

After Andy and I both went on stage for Q & A. We discussed our influences, how the projects came together, how our brain experiences affected the final product (Andy had already shot and been in post when he was diagnosed - I was at screenplay stage when I was diagnosed). I had a private moment on stage, remembering that a decade prior on 5/6/07 I ran the Vancouver BC marathon to raise $ for the National Brain Tumor Foundation and now here I was with a finished feature, standing next to another brain tumor survivor talking about his feature. I can't fully express with words the power and gravity of this feeling but I'll reduce it to this: gratitude. Andy and I are hoping/planning to replicate our double feature again in the fall at another Portland venue. Stay tuned.

Later, across the street at Dots with Scott (who shot and co-produced THE BLACK SEA) and Erin (who plays Charlotte),  Michael (who plays the gallery employee), filmmaker Ryan Graves  and some other friends a robust discussion about certain scenes arose. What did this scene mean? Why did character X do Y? I didn't answer as much as observe. It was a reminder of the power of cinema and how this movie that I made, that I hadn't seen/contemplated in awhile, that's been in the rearview mirror for me for quite a duration still has a pulse, is still here, is still alive.

posted Brian Padian at 9:17 AM