Drove to Washougal Friday night solo, meant that MM had to put kids down herself something I've done for her many times recently so she can attend readings. Living the dream. Got to Washburn Auditorium and checked in. Felt terrible to have not been to any other screenings at the fest but was out of town last wknd to be backup for M while she tended to her ma (hip replacment surgery if you must know) and just generally consumed with daily operations otherwise (day job, 2 kids etc) that made attending untenable. Got a great vibe right out of the gate from the people, the space, the whole deal. I was in my really-nervous-but-trying-too-hard-to-not-appear-so thing which meant as I tried to appear casual shaking someone's hand I also caused 5 laminated filmmaker passes to slide off the table in the process. such it is with me.

Got into Auditorium and got to see the end of a feature and a Q&A and found my seat at the very back, where I most prefer to be. A few minutes to reset the auditorium and then two short films first by NW Filmmakers. First was "In Search of the Miraculous" by Sam Kuhn, which I mostly enjoyed,  and then "Hiding Blame" which was written/produced by Lori Morgan and directed by Scott Ballard who was my co-producer & DP on "the black sea". (Hiding Blame shares some other DNA w/ us: Jordan Eusebio as prod sound/design, Kevin Forrest, Josh Smith et al). There was a Q&A with Lori after the screening - Scott was held up on a shoot somewhere - and then the lights went down and it was time for "the black sea".

This marks the 3rd time I've seen it with an audience (2nd if you count only the final color-graded version) and - no surprise - it changes with each viewing, conforming to the contours of the venue, the audience, the atmosphere on a given night. At STIFF there were a few laughs here and there and this time nothing. Silence. Since I've seen it around a gazillion times I find parts difficult to sit through (alternate word choice: endure), a common enough thing for filmmakers who after repeated viewings no longer focus on the narrative and can see only their shortcomings lit up on screen. Despite that, after a time I felt myself slowly drawn in, thinking the same thing I thought at the STIFF screeening: holy moly, we cast the hell out of this movie! I also felt the sensation surge through me that despite the easy accessibility of streaming/VOD the true standard (only?) way to watch a film is in a darkened auditorium with strangers, heads tilted reverently up at an image greater than them in size. (I say this as viewer and filmmaker alike.) By the end of the screening I was able to let my focus lay on the film's strengths instead of my filmmaking weakenesses and felt a pulse of pride about it, that lasted through the weekend.

During the Q&A I felt myself get fumbly and self-conscious when my brain tumor arose. I mean, I brought it up but I had to when talking about the intent of the film and the history of how it fell into place. Not mentioning it would be disengenuous. Hard to get a read entirely on how the film was received but this movie is kind of like that. A couple people said very nice things.

Afterward I got to spend a few minutes talking with a filmmaker Kathleen Davison, who had a short and a feature at the festival this year. I knew her via social media - I reached out to her a couple years ago after seeing an article about how her brain tumor treament was interfering w/ finishing her feature as she got it ready to submit to Sundance - but this was the first time we met in real life. We traded stories about our features and our respective brain experiences. Her feature Primrose Lane is currently been all over the place and when I asked her about that she said touring around in support of her film was amazing but more amazing was that it represented her ability to draw breath and do so. I knew exactly what she meant.

I drove home from Washougal to Portland which allowed me to listen to adult music for an hour or so - which was like a mini-vacation - and when I got home I drank a couple beers. 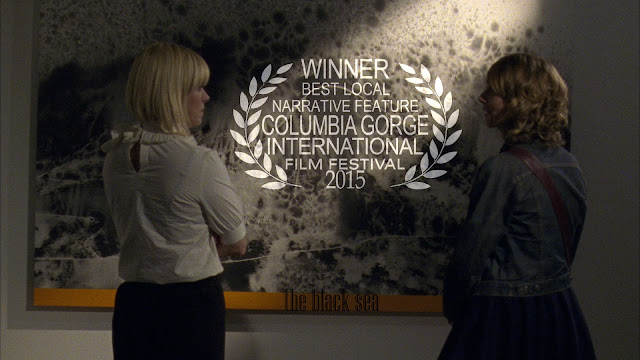