Had been waiting for 9/4 with equal parts of excitement and dread. On the one hand absolutely thrilled to finally premiere the black sea to a home audience and on the other that internal FRAUD voice was sure to be at its most pointed at home. I equate my pre-screening sensations to one of pre-flight nervousness. Will there be turbulence? Will the plane crash?  Once I'm airborne those feelings dissipate but leading up to that moment I'm not the best company. (note to self: get some therapy.)

First up was the Directors' Coffee Chat at the Filmmakers' Lounge. I showed up at roughly 9:30 and waited outside along w/ a few others - a journalist and 2 directors - in the unseasonable cold. Once we all got inside things moved at a quick clip. Lots of directors had screenings that day so there were several panels. Each director fielded a few questions about their film's process or narrative and then it was done. My big takeaway: there were a ton of awesome-sounding films at the festival. Most  I would not be able to see due to my own schedule but it was thrilling to be included among them.

Afterward I headed over to Living Room Theaters. It was about 11:30 AM. My plan was to make that home base for the day and watch multiple films prior to my screening at 7:45 pm that night. By my calculations I could see 3 movies. Met some (very cool) PFF staffers who told me I'd be in Theater 1 for my screening that night as well as for the movie at noon I was about to see. It helped diminish my anxiety to be inside the same theater, to see the actual chairs/walls/screen etc. It didn't help diminish my anxiety when there was audio for a couple minutes and no video. I walked out to the lobby and informed staff. Luckily it was just the trailers for a couple other PFF films. They corrected the issue and I laughed to myself that it was probably just a function of 1st screening of the day and would certainly not happen during my screening. At last the film played without incident and was absolutely amazing despite me being one of four attendees. I had some time before the next film started so I headed off for a quick slice of pizza. As I was eating someone tweeted a new review of the film, which included the phrase "it's a chore to watch". This filled me with relief. I have long conducted my life from the default position of lowered expectations so for a second I was going to promote the poor review everywhere at full volume, recalling D. Lynch's similar tack with Siskel/Ebert and Lost Highway but then decided to just allow people to have their own opinion of the film w/o my interceding in any form (note to self: again dude, get some therapy.)

I returned to Living Room and watched 2 more films and was able mostly to keep my mind off the approaching screening. Eventually I found myself sitting at the counter drinking a beer, about to get cozy and read my book for an hour or so to kill time when who should arrive but Matt S (who plays Eli in the film) and his beloved. Perfect timing. Had dinner with them and shot the breeze and the minutes ticked by and people began arriving for the screening which was, happily, at capacity. 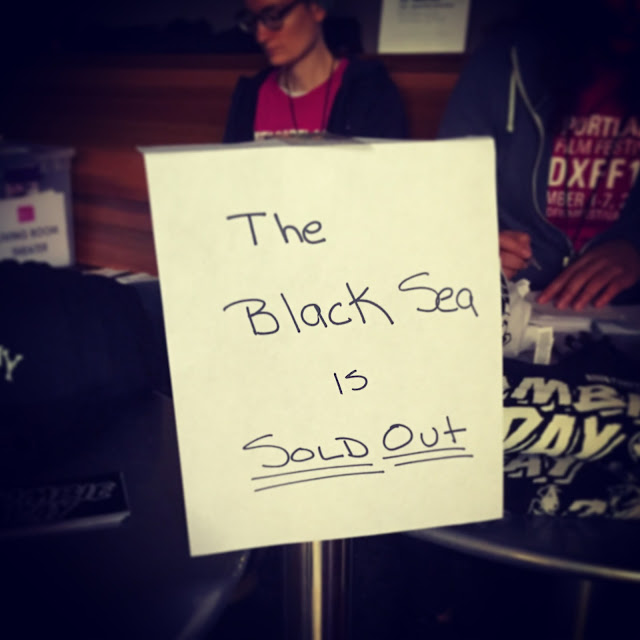 A short time later I'm inside Theater 1 introducing the film. The lights go down. A minute passes. Another minute passes. No sound, no image, just darkness. Something is wrong. I can feel that tight constriction in my heart and gut. A repeat of this AM. I walk to the lobby to inform staff that nothing has happened and we're all sitting in darkness. A minute or two later there is at last picture but no sound. I return to the lobby to tell them. At last the trailers for the PFF films play (though they were certainly not selected with any relation to the feature to screen, no narrative or thematic connection) and then finally, after interminable duration (which Margaret informs me was more like a few seconds) my film begins. This is the fourth time I've seen it finished with audience. The film is not always easy to watch and seems to polarize audiences into either the really liked it camp or the slightly befuddled what the hell was that camp (note: this is not verifiable just my gut reaction after several screenings. in point of fact there are many waystations between those polarities and reactions could really be falling at any one of them) and I could tell right from the get-go, from the energy in the room, and the lack of laughter at a couple early moments/lines that this screening would primarily be the latter camp. That said, I've had several people contact me a day or two after screenings, stating that the film stayed with them. Meaning, it's tricky to base the merit of a film (read: anything) on the immediate high/low of kneejerk reaction. 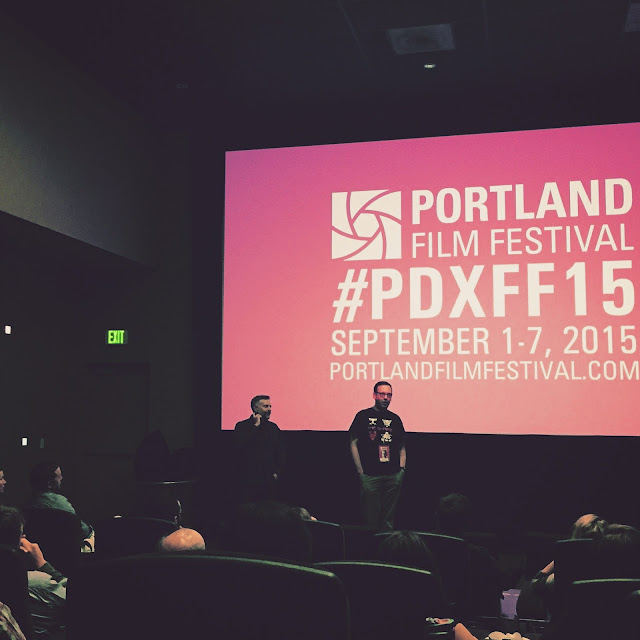 A short time later Matt and I are at the front of the room conducting the Q & A. I'm asked about time frame, about shooting on film, about the ending, about shoot days etc. All goes swimmingly. Afterward Margaret and I stay out in the lobby for a bit catching up with friends and talking about the movie before heading home.

The next morning I feel profound relief. No one threw tomatoes and the film looked/sounded amazing in the venue. And no matter anyone's reaction, the performances in the film are empirically amazing (well, I'm biased but they are).

All my dread/anxiety gets vented via this 1st screening so I'm in good shape for the next screening, at 5 pm later that day, Saturday 9/5. Not sure if it's per se sold out this time (b/c some enter w/ filmmaker passes) but every seat is filled. The energy in the room is 10 times better (or is it just me?) and there are laughs at all the right spots. It is awesome and validating. The Q & A goes great too. I get some of the same questions (why film? where'd you shoot? how long was production?) With each successive screening I've become more facile at discussing my brain tumor and how it intersects with the development of the film across the last decade. This is no small thing. (Also, at the back of my mind is the awareness that a decade ago Margaret and I were prepping our trip to Boston, where I'd live in a hotel for 2 months while I rec'd proton beam radiation at MGH and that there was still then a pulsing, fearful, black uncertainty about whether I'd be around for awhile or not, much less worrying about something as meaningless as a bad film review some time later.)

I come away from the entire festival feeling enervated and re-energized, eager to support this film to the fullest as well as get my next thing/s going. Just a question of how to finance them. (as always!) In addition to my screenings I saw 5 other features and a couple shorts and met some awesome individuals and filmmakers. Sorry to see the fest reach its inevitable end but feel exceedingly grateful for and joyous about the black sea's inclusion.

On to Boise Film Fest! 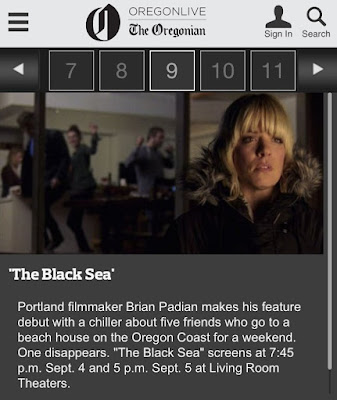 Love this recap. So glad it went so well, was such a fully felt experience for you - your telling made me a little weepy, actually - and now onward, with this and the next one! xo

thanks for reading Stephen!